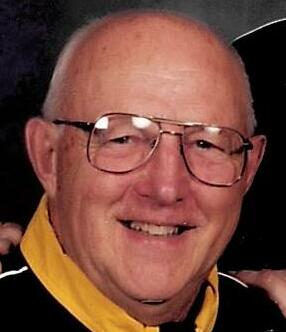 Please share a memory of Joseph to include in a keepsake book for family and friends.
View Tribute Book
Joseph A. Kahle, age 94, of Tomahawk passed away peacefully on Wednesday, August 31st at Country Terrace Assisted Living Home in Tomahawk under Aspirus Hospice Care. Joe was born August 24, 1928 on Bruno Kahle’s farm in Tomahawk, WI to Albert and Evelyn Kahle. He was baptized on February 10, 1929 at the Methodist Church. Joe attended Gilbert School and was a graduate of Tomahawk High School, class of 1947. In addition to working on Bruno’s farm, he spent his early years and throughout his high school years working in the woods to furnish timber for the sawmill business owned by his father. After his mother’s untimely death when Joe was 14 years old, he helped raise his four younger siblings. Joe had a life-long love of baseball and played with the Road Lake Lakers until 1947. He then signed on as pitcher with the Wausau Lumberjacks (Detroit Tiger Farm Club). After a few months, he was released from the team and returned to play with the Tomahawk Cubs. Joey’s sister, Elsie – on his behalf – asked Dorothy Hilgendorf out on their first date in June of 1949. The rest is history: he was smitten and she quickly became the love of his life. Joe was drafted into the Army on November 30, 1950. He proposed to Dorothy at Christmas that same year. They were married on July 7, 1951 and celebrated their 70th wedding anniversary in July of 2021 surrounded by their children playing outdoor games similar to their famous Memorial Day picnics. In the spring of 1953, after serving in the Army, they returned to Tomahawk. Joe resumed working in Tomahawk with his father and then found employment with MT&W Railroad. He had also at times been employed by Bradfish Electric and worked with Pete Pickett on electrical work. In 1955, he began playing baseball again with the Mug and Jug team and started work as a Mobil Oil Distributor delivering fuel oil and gas to residential customers. Joe’s workday for years would include a break at 9 AM for coffee at Getty and Pete Pickett’s house. He and Dorothy rounded off this tradition with another daily visit to Aunt Getty’s after school for another game of cards. Between the years 1952 and 1962 Joe and Dorothy had five children and they spent their time with dedication and love towards their growing family. In 1958, Joe & Dorothy moved their family into the home which – like his father before him – Joe and his dad built using wood from his father’s sawmill. In 1963, Joe became an avid golfer. He and Dorothy played on weekly leagues at the Edgewater Country Club. Joe was the official score keeper for his league for many years, reporting the weekly results to WJJQ Radio to announce the standings. In 2020, at age 92, Joe finally retired from golf. In 1965, he and Dorothy became enthusiastic spectators and season ticket holders of the Green Bay Packers, attending games with friends and family. His friends and family will remember him for his love of children and family, his sense of humor, playfulness, work ethic and his enduring faith. Survivors include his children, Dana (Myra) Kahle of Union Grove, WI; Pam (Mark) Czerwinski of Kronenwetter, WI; Kim (Michael) McDavit of Arlington, VA; Kay (Jeff) Olson of Tomahawk; and a daughter-in-law, Polly Kahle of Tomahawk. He is further survived by two sisters, Phyllis Evans and Ginny (Gene) Swan; 12 grandchildren, 30 great-grandchildren. Joe was preceded in death by his parents, his wife - Dorothy; his son - Todd; his brother - Donald Kahle; his sister - Elsie Bartz. Funeral Services for Joe Kahle will be held on Saturday, September 10th at 12:00 at Redeemer Lutheran Church. Pastor Mark Gass will officiate. The family will receive friends at Redeemer Lutheran Church from 10:00 until 12:00. The Krueger Family Funeral Home is assisting the family with arrangements. You may view the obituary and share online condolences at kruegerfamilyfuneral.com. Postscript: Joe listened to the obituary announcements on WJJQ Radio as another one of his daily routines every morning without fail. He had a wonderful sense of humor and after listening he would say, “Well, I can go to work now since they didn’t announce my name.”
To plant a beautiful memorial tree in memory of Joseph Kahle, please visit our Tree Store
Print
Saturday
10
September