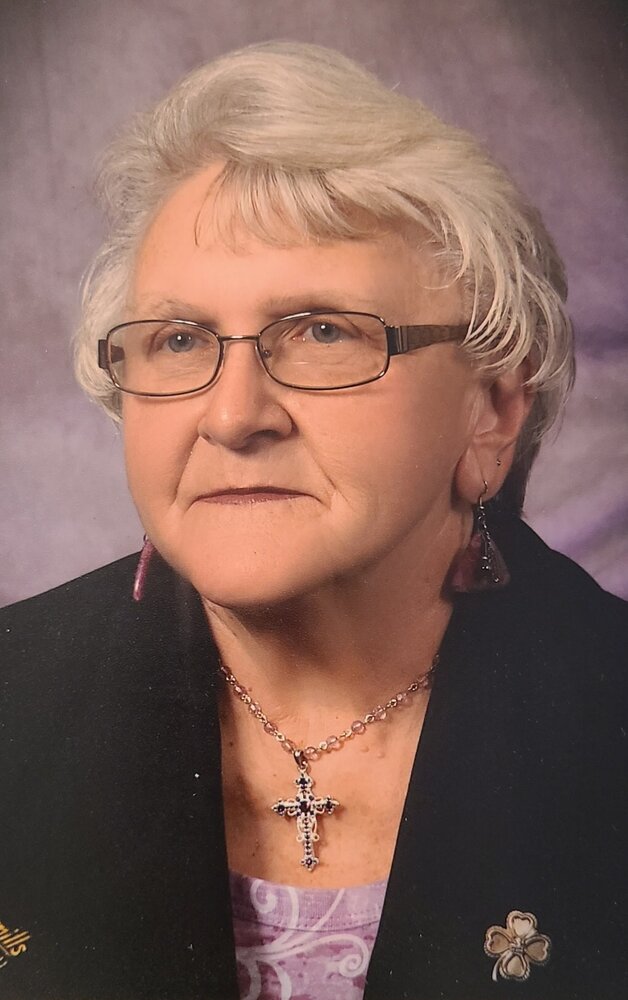 Please share a memory of Marie to include in a keepsake book for family and friends.
View Tribute Book
Marie Joan (nee Grulke) Stark, age 84, passed away unexpectedly on Wednesday, August 24, 2022 at her home. Marie was born on December 10, 1937 to Hugo & Marie (Matthiae) Grulke, the youngest of seven children. She was baptized on Jesus’ birthday – December 25, 1937 at the home of her parents. Her god parents were her sister, Ruth, and Mr. & Mrs. Henry Bruce. She was confirmed on March 17th. 1951 at Dr. Martin Luther Church where she was later married to Roger C. Stark on July 21, 1956. Roger went to be with the Lord on April 29, 1997. Six children were blessed to Marie & Roger – Mark, Gary, Amy, Steven, Paul and Peter. God also blessed Marie with 17 grandchildren and 24 great grandchildren who added so much to her life. The days at the cottage and at parties will never be forgotten. Marie and Roger lived in Lake Mills for many years. Marie worked at St. Coletta-Alverno where she got involved in Special Olympics and was a coach for many sports. During the 35 years there, she was named “Coach of the Year” for the state of Wisconsin. She and Roger purchased a cottage in Tomahawk in 1995 and spent many weekends and summers there. Following Roger’s death Marie traveled all over the world with Able Trek Tours chaperoning “special people.” This filled a big hole in her life. In 2015, Marie decided to make Tomahawk her permanent home. She made many wonderful friends and found a great church – Grace Lutheran Church. At this church, she was active at bible studies, mentor for confirmation, part of the kitchen group, altar guild, communion server, reader and later joined the quilting group. Marie also was involved in Topps, Strong Bodies exercise, Monday yoga classes and a group of ladies she ate with for Tuesday suppers. She had donated over 15 gallons to blood drives and she enjoyed her trip to Africa with a group from Grace Lutheran Church. Marie loved her flowers, both indoor and out and enjoyed many hours tending to them. Marie is survived by her children – Mark (Tracey) Stark of North Carolina, Gary (Dawn Wolff) Stark of Waterloo, WI, Amy (Willy Mammerow) Stark of Sullivan, WI, Steve (Tina King) Stark of New Hampshire, Paul (Julie Peterson) Stark of West Bend and Peter (Wendy) of Lake Holcombe, WI. She is further survived by many grandchildren and great grandchildren; God-daughter – Linda Gardner; Foster daughter – Sue Stroebel. She is preceded in death by her parents, husband – Roger and siblings. The funeral service for Marie Stark will take place at 11:00AM on Monday, August 29, 2022 at Grace Lutheran Church. Pastors Julie Sinkula and Susan Christian will officiate. Visitation will take place from 9:00AM until the time of service at 11:00AM. Memorials are appreciated to Grace Lutheran Church in Tomahawk or Trinity Lutheran Church in Lake Mills. Krueger Family Funeral Home & Cremation Services is assisting the family with arrangements. You may view the full obituary and leave online condolences at www.kruegerfamilyfuneral.com
To plant a beautiful memorial tree in memory of Marie Stark, please visit our Tree Store
Print
Monday
29
August