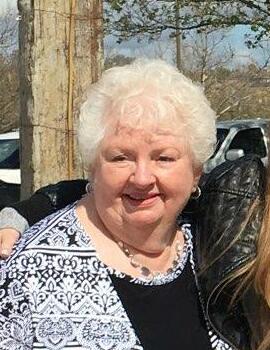 Please share a memory of Marge to include in a keepsake book for family and friends.
View Tribute Book
Margaret “Marge” Schulz, 79, of Belliveau Road, Tomahawk, took Jesus’ loving hand and joined Him in eternal peace on Christmas Day at Howard Young Medical Center in Woodruff. There, Marge was greeted by the love of her life, Fred, who had been patiently waiting 25 years for her arrival. He had their fishing poles waiting in a boat and manhattans poured for them both. Marge was born July 12, 1942 in Ladysmith, Wisconsin to Henry Robert Graeber and LuCinda May Nelson. Marge grew up in logging camps in northern Minnesota where her father was a logger and her mother was a camp cook. (Sometimes, Grandma Cindy would crack open an Old Milwaukee and tell us grandkids stories about her tattoos and her younger days as a rum-runner in the logging camps which never went over well with our mom.) When people told Marge they loved her sass, Marge said it was because of her red hair she inherited from her mother, her wild Graeber blood, and her upbringing. No matter the source, Marge came by that sass honestly. She married Fredrick J. Schulz on October 21, 1961 in Tomahawk. Fred was the yin to her yang. Together, they made a life filled with family, friends, memories, and phenomenal food. Like many families, Marge’s life story can be told through food: secret restaurant recipes illegibly written on index cards stuffed into a recipe box, a well-loved recipe for Aunt Mary’s Never-Fail Sponge Cake written on the inside cover of a cookbook that once belonged to her dearest Grandma Elsie that many Schulz kids had for a birthday cake each year, and innumerable recipes passed down in old letters and church bulletins, on postcards and the backs of envelopes, and recipes from favorite aunts and friends that were stuffed into the pages of any number of cookbooks that filled her cupboards. While most folks know Marge as the matriarch of the Schulz family and the Pine Tree Supper Club, her restaurateur origins began as a waitress at LaNou’s and Phil’s in the 1960s and 70s. She spent time driving school bus and helping Fred run the Enco Gas Station just down the block from where Pine Tree now is. In 1980, Marge and Fred purchased the Pine Tree, and the life stories of women long passed were brought back to life in the food Marge made for others. Over time, more stories were added through the food the restaurant served: her husband, her children, and countless dear friends. Many of you who read this will miss her greeting you by name with a smile as you walk in the restaurant, telling you her latest joke, or making you the best damn old-fashioned in the Midwest. We hope you share her stories with others; that’s part of the legacy she leaves behind. For those of us who call her mom, there is an emptiness without her which is no small thing. The warm memories that have been flooding in since she left us have filled us immeasurable joy. No life is an easy journey, and our mom’s was no exception. Anyone who met our mom knew she was a force to be reckoned with; she had to be. She was a woman with moxie. That is what made her one-of-a-kind, and the world will never see another firecracker like her again. Surviving Marge are her six children; Fred (Sue) Schulz, Michigan; Tim (Adriana) Schulz, Idaho; Bill Schulz, Tomahawk; Joe Schulz, Minnesota; Kelly Schulz, Tennessee; and Kari (Curt) Strebig, Tomahawk. She is further survived by 13 grandchildren, 9 great-grandchildren with 1 more great-grandchild arriving soon. Marge was preceded in death by her parents; husband, Fred; grandson, Timmy; dearest friend, Betty Diderrich; and brother, Robert Graeber. In accordance with her wishes there will be no public funeral. Her life will be celebrated privately by her family. Krueger Family Funeral and Cremation Service are assisting the family. You may view the guestbook and share online condolences at kruegerfamilyfuneral.com
To plant a beautiful memorial tree in memory of Marge Schulz, please visit our Tree Store

A Memorial Tree was planted for Marge
We are deeply sorry for your loss ~ the staff at Krueger Family Funeral Home
Join in honoring their life - plant a memorial tree
Services for Marge Schulz
There are no events scheduled. You can still show your support by planting a tree in memory of Marge Schulz.
Plant a tree in memory of Marge
Print
Online Memory & Photo Sharing Event
Online Event
About this Event