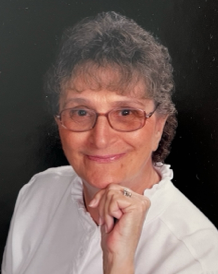 Please share a memory of Janet to include in a keepsake book for family and friends.
View Tribute Book
Janet was born on July 20, 1940 in Marshfield to Armond & Luella (Riel) Duellman. She was raised in the township of Cassian and was a 1958 graduate of Rhinelander High School. She married Gerald J. Osterberg on July 18, 1964 at St. Joseph Catholic Church in Rhinelander. She and her husband lived in Racine and later in Union Grove from 1964 until they retired in 1995. She worked as a supervisor for Ametek Lamb Electric in Racine for 24 years. Upon retirement, she and her husband moved back to the town of Nokomis where she resided until her death. Jan enjoyed snowmobiling, partridge hunting with her husband, making crafts and especially spending time with her children and grandchildren. Jan is survived by her husband – Gerald; a daughter – Cindy (Greg Clancy) Bergland; a son – Michael Osterberg; and two granddaughters – Hannah & Michaela Bergland. She is further survived by four brothers & two sisters. Jan is preceded in death by her parents, three brothers and one sister. A private service will be held for immediate family. Burial will take place in Prairie Rapids Cemetery in the town of Nokomis. Memorials may be made in Janet’s name to St. Mary Catholic School in Tomahawk. Krueger Family Funeral Home & Cremation Services is assisting the family with arrangements. You may view the full obituary and leave online condolences at www.kruegerfamilyfuneral.com
To plant a beautiful memorial tree in memory of Janet Osterberg, please visit our Tree Store

A Memorial Tree was planted for Janet
We are deeply sorry for your loss ~ the staff at Krueger Family Funeral Home
Join in honoring their life - plant a memorial tree
Services for Janet Osterberg
There are no events scheduled. You can still show your support by planting a tree in memory of Janet Osterberg.
Plant a tree in memory of Janet
Print
Online Memory & Photo Sharing Event
Online Event
About this Event