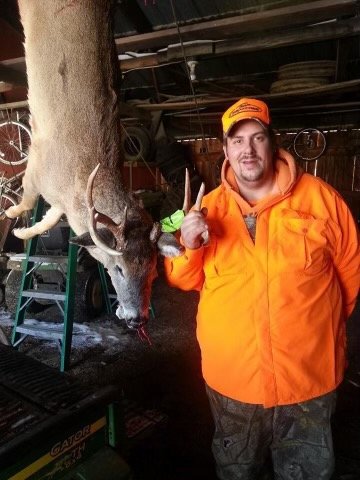 Michael “Mikey” Edwin Wiesman, age 40, of Hazelhurst, passed away unexpectedly at his home on June 5, 2021.   Michael was born on December 27, 1980 to Merlin & Veronica (Kroening) Wiesman. Mike was a graduate of Stratford High School. After high school he worked as a beer delivery driver where he earned the nickname “Beer Man.” He followed in his father’s footsteps serving on Stratford Area Fire Department as a first responder and firefighter. At the time of his passing, he was employed as a welder at Samuel Sons & Co in Tomahawk. He was the proud father of two beautiful girls – Kendra Wiesman & Kailey Kraegenbrink. He was also the proud uncle of one nephew and three nieces who knew he always had candy and popsicles for them. He was always more than willing to help anyone that needed it. Mike will be missed by many people especially his two daughters – Kendra (Lauren Erickson) Wiesman of Menasha & Kailey (Jace Rausch) Kraegenbrink of Medford; his parents – Merlin & Veronica Wiesman of Hazelhurst; brother – Troy (Shae Reckner) Wiesman of Stratford; sister – Michelle (Troy) Multerer of Lindsey; nephew – Connor; and nieces – Izzy, Lauryn and Lexi. He is further survived by his grandmother – Isabelle Kroening; a special friend – Lisa Schmitt of Merrill and many aunts, uncles, cousins and friends. Mike is preceded in death by his grandfather – Bernard Kroening & grandparents – Edwin & Orpha Wiesman.  In memory of Mike, we ask that you live each day to the fullest and help someone in need. The Visitation for Mike Wiesman will take place on Monday, June 14 from 3:00PM until 6:00PM at the Krueger Family Funeral Home in Tomahawk. Visitation will continue at the Village of Fenwood Town Hall on Tuesday, June 15 from 12:00PM until 3:00PM. Mike will be buried in the Village of Fenwood Cemetery. Krueger Family Funeral Home & Cremation Services is assisting the family with arrangements. You may view the full obituary and leave online condolences at www.kruegerfamilyfuneral.com
To plant a tree in memory of Michael Wiesman, please visit Tribute Store
Print
Monday
14
June