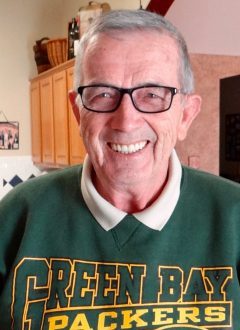 James Denetz, 83, passed away on June 23, 2020 at his home in McKinney, Tex., under hospice. James was born July 9, 1936 in Irma, Wis., to August and Matilda Denetz. He graduated Tomahawk High School in 1954 and married Charlotte (Chuckie) Matthews on June 22, 1963. He formerly owned and operated EW Enterprises on South Tomahawk Avenue with his brother John and later was employed by the Tomahawk School District. Following retirement Jim and Chuckie moved to Texas. He loved his family and friends, enjoyed golf, fishing, hunting, being in the woods, and watching all Wisconsin sports teams, especially the Brewers and of course, the Packers! James is survived by his loving wife, Chuckie; three sons Brad (Terri) in Argyle, Tex.; Mark (Becki) in McKinney, Tex.; and Scott in Las Vegas Nev.; and two grandsons, Dustin and Cole. A private family celebration will be held in Texas at a later date. Krueger Funeral and Cremation Service is assisting with local arrangements.
To plant a tree in memory of Jim Denetz, please visit Tribute Store
Services for Jim Denetz
There are no events scheduled. You can still show your support by planting a tree in memory of Jim Denetz.
Visit the Tribute Store
Plant a Tree
Print
Share A Memory
Plant a Tree